Who were some fashion influences in your youth?

Ed Hardy was a big influence on my generation growing up. The bright, vibrant colours and the crazy designs always stood out to me. I still love the brand and I have a few pieces that I still wear today! I also admire Puma. Back in 2006, when Italy won the World Cup, I remember buying a whole Puma wardrobe. I think your sense of fashion plays a huge role in your character. I believe that when you look good, you feel good.

When did you discover your personal style?

I think when I was exiting high school is when I discovered my personal style. Before that, I always followed the crowd and never thought for myself. Over time, I broke out of my shell and started to be more confident and expressive in how I dressed and acted around people. I have an old soul, so this plays a huge role in how I dress and act. I admire vintage clothing, bright colours and baggy clothes. However, I really do like looking sophisticated at times too, wearing a nice blazer with dress pants, or nice jeans and a clean pair of shined shoes!

Who do you look to now for style inspiration?

I look to a lot of my favourite actors for style inspiration. I admire Johnny Depp’s style as it’s more edgy and “rocker”-esque. I play a lot of instruments and love rock music, so that’s why I love his style. I also look to Brad Pitt from the 90s, as he was very out there. I remember he did a fashion shoot in a pink dress — and even though I would never wear it, it inspired me to dress however I want. Style is like art — everyone has their own look and it means something different to them.

Is there an item that you collect (like a sneaker collection)?

I collect watches. I have a vast collection of them ranging from Gucci to Burberry to Michael Kors to some local Toronto brands like “Maestro.”

You’ve interviewed some great guests on your show, “The Up & Adam Show.” If you could have anyone on your show, who would it be (a few dream guests)?

I think one of my dream guests would have to be Sylvester Stallone. He is such an inspiration to me 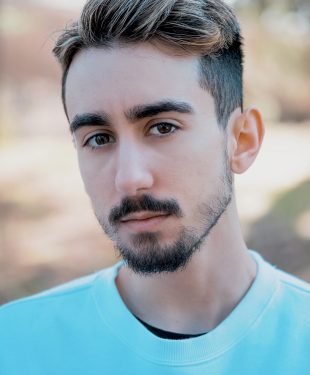 because he is always true to who he is and never sold out. He took the biggest pay cut when he made “Rocky” just so he could star in it. It was one of the best decisions he made. That inspires me because it reminds me that sometimes you need to take one step back in order to go two steps forward. Another dream guest would have to be Brendan Fraser. He has starred in some of my all time favourite movies like “The Mummy,” “Airheads” and “Encino Man.” His presence on screen is amazing and makes me feel very comfortable. I know that sounds weird to say, but he comes off as such a friendly guy and I would love to just talk about life with him. I think he is a very interesting guy.

James Corden has really changed the talk show game with his creative side. Do you ever study other talk show hosts?

Yes I do! I watch all the late night show hosts as they all bring something valuable to the table. I think the one thing I study is the overall format. I do love how the late night show hosts have a monologue and then it cuts to the interview. It’s very interactive and I’m a huge advocate for being personable with people. I want to be as relatable as possible to people because anyone can do what I do. Anything is possible.

We noticed your show has a “Tonight Show” feel. Can you tell us about that?

Yes, I grew up watching “The Tonight Show” and I love how professional it looks. I want to have a similar vibe but make it my own. I’ve implemented monologues into my show and have also added different segments in each episode to bring some extra value to people. I also love how my show has the city landscape behind me, though I might update it and change it down the road. My main admiration for “The Tonight Show” is how big it is. It’s truly larger than life. I really want people to watch my show and take it seriously since my team and I have put so much hard work into it.

“Going in one more round when you don’t think you can — that’s what makes all the difference in your life”- Rocky Balboa. I love this quote because it’s a symbol of never giving up, no matter what obstacles you may come across. Life is going to throw you so many curveballs and do everything in its power to keep you from chasing your dreams, but it’s up to you if you want to go that “extra round.”

You’re based in Toronto. What would you recommend we do if we only had 1 day in the city?

I would recommend to visit some of the amazing restaurants. There are so many and I’m a huge food lover, even though I never gain any weight! [laughs] I also would recommend going to the Royal Ontario Museum and visiting the C.N Tower.

For more information on “The Up & Adam Show,” please visit: https://linktr.ee/theupandadamshow.