Drake took to Instagram to share an adorable new photo of his three-year-old son Adonis stretching his arms out and being cheeky for the camera.

Drake, 34, is sharing another cute pic of his son Adonis, 3, and it’s one of the best ones yet! The rapper posted the snapshot to Instagram on Sept. 13 and in it, the curly haired cutie is sticking out his tongue while his arms are stretched out wide. He was wearing a white short-sleeved top and light denim jeans and looked as happy as could be. Check out the pic HERE!

“I feel you kid 💖,” the proud dad captioned the snapshot. Once he shared it, his fans were quick to respond with compliments. “So cute!” one fan gushed while another called him “a young legend.” A third commented on how big he’s gotten and a fourth wrote how much they loved his full head of curls. Many more left heart-eyed emojis to signify their love of the photo. 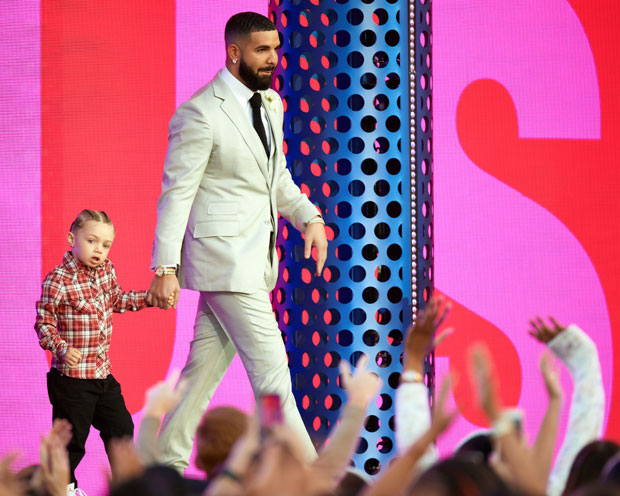 Drake and his son Adonis walk on stage together. (Shutterstock)

Drake’s latest pic of Adonis, whom he shares with French model Sophie Brussaux, comes after he made headlines for rapping about his life as a father in his new song “You Only Live Twice.” One of the lines in the track, which also features Lil Wayne and Rick Ross, is, “I had to f**k a lot of girls to get a kid like this,” and even though he doesn’t mention his son by name, it’s presumed he’s talking about Adonis since it’s his only child.

Although Drake kept Adonis’ birth private for a while,