Hailey Baldwin made the case for fall tones during summer while running errands. See the pic!

Hailey Baldwin effortlessly channeled autumn in the summer with chic fall tones in Beverly Hills on July 6. The model, 24, ran errands in a fuzzy brown crop top and plaid pants to match on Tuesday, completing the stylish look with black sunglasses, a brown handbag, and sneakers. 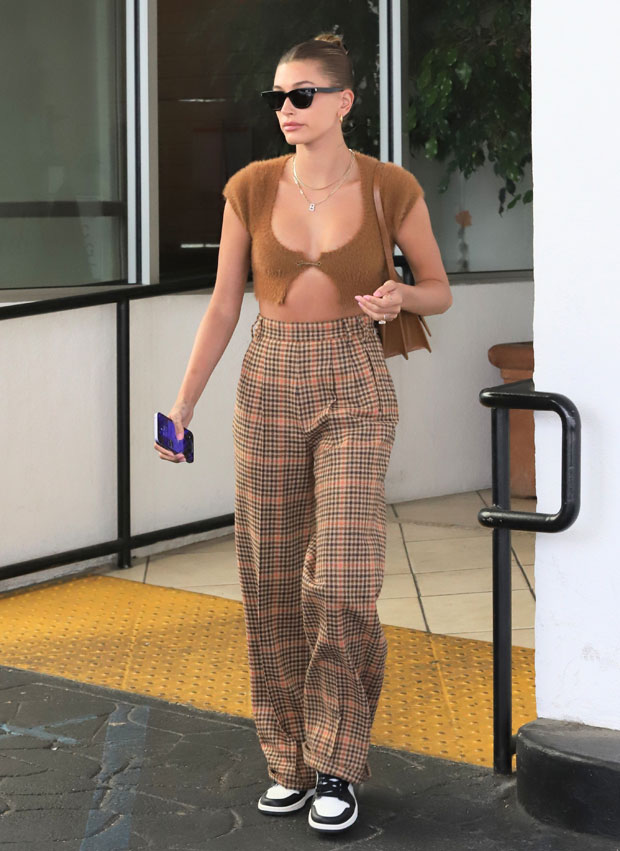 Not to be beat by the summer heat, Hailey’s crop top featured a risqué plunging neckline with the front attached via clasp, showing off her bare stomach. She also styled the look with earrings and a necklace with the letter “B” on it, which presumably represents the initials of her and husband Justin Bieber‘s last name.

The stylish street style moment comes after Hailey and Justin, 27, enjoyed a vacation in Greece last week. The Canadian singer shared a selfie aboard a yacht on Instagram on June 28 and gushed about his “lovable” wife. “thank you for being the sqishiest most lovable human on the face of the earth,” Justin captioned the post. Over the 4th of July weekend, too, the two were photographed aboard yet another yacht, packing on the PDA toward the last leg of their trip. Ah, to be young, wealthy, and in love.

Hailey and Justin tied the knot in September 2018 in an intimate courthouse wedding, throwing a more lavish ceremony the following year. The couple first met as teens but became romantically linked in 2015, weathering an on-again, off-again relationship until their eventual engagement. In an interview with ELLE for the magazine’s April 2021 issue, Hailey opened up about the decision to wed so young.

How Playing Online Bingo can Improve Your Brain Power