Naomi Osaka just claimed the Australian Open, winning her 4th career Grand Slam! Learn more about the 23-year-old who is a rising star in the tennis world.

Naomi Osaka, 23, has done it again! The tennis superstar has claimed the 2021 Australian Open after she took on Serena Williams, 39, in the semi-finals and beat out Jennifer Brady for the Grand Slam title. Naomi, a rising star of the sport, now has four major career wins, including the 2020 U.S. Open, the 2019 Australian Open and the 2018 U.S Open.

She has also been at the forefront of the fight against racial injustice and police brutality. Throughout the 2020 U.S. Open, she wore protective masks that featured the names: Trayvon Martin, Ahmaud Arbery, George Floyd, Breonna Taylor and Elijah McClain. Each name represented the identity of a Black person who died at the hands of police. Learn more about Naomi, who’s emerged as one of tennis’ leading voices on issues of racism, equality and more! 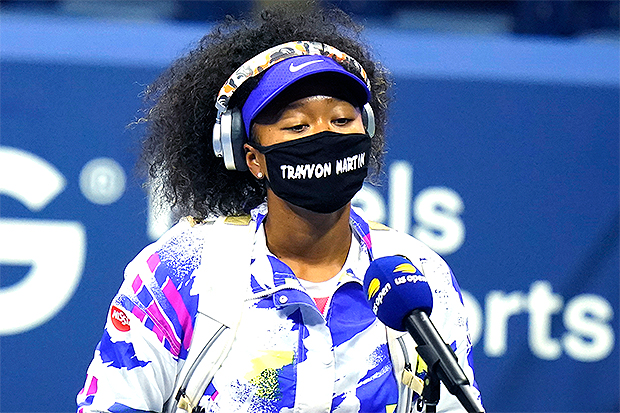 Naomi Osaka wears a Trayvon Martin mask before a fourth round match against Anett Kontaveit, of Estonia, at the US Open tennis championships on September 6, 2020, in New York. (Photo credit: AP)
1. Naomi Osaka is a professional tennis player who represents Japan.

She started her professional career in 2013, despite playing at a young age. In 2016, she won “Newcomer of the Year” at the Women’s Tennis Association Awards. Naomi went on to win the 2018 US Open and the 2019 Australian Open. In March of 2018, Naomi became the first Japanese woman to win the Indian Wells Masters in California. The event is widely considered the second biggest event in tennis,