Tom Hanks and Tina Fey were also joined virtually by Martin Short and Steve Martin for the ultimate star-studded opening.

Paul Rudd just got the career honor of a lifetime: he was crowned a member of the Five-Timers club on Saturday Night Live! The 52-year-old hosted the final show of 2021 on Dec. 18 and had the honor of being inducted by former SNL cast member Tina Fey and legend Tom Hanks, who’s also a member of the formidable club (as is Tina). Tina and Tom lead the opening in matching “5” robes, explaining that tonight’s episode was looking a little different due to COVID-19.

“I am not alone — isn’t that right Tina?” Tom announced as Tina walked out. “I am here, and this is not the smallest audience I have performed for as I have done improv in a Macy’s,” she hilariously joked, wearing her signature black glasses. “Tina, another five timer…thank you for joining me. As you know I started the five timers club…” the Cast Away actor went off, as Tina interjected: “Oh, like you started COVID?” Notably, Tom was the first public figure to be diagnosed with the virus in March 2020 alongside his wife Rita Wilson. 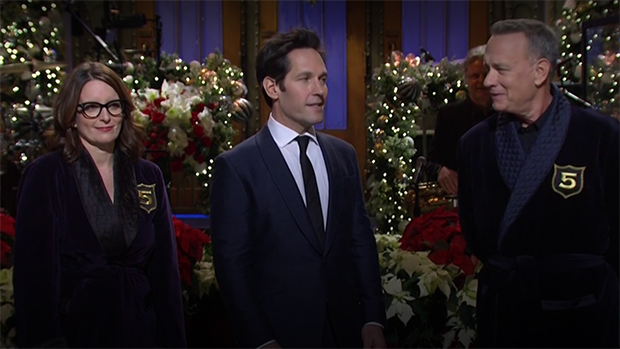 “Tonight, we plan to welcome Paul Rudd to the club and we are not going to let this stop us,” Tom then declared, as Paul made his entrance. “Thank you for coming! I’m extremely disappointed,” the Ant-Man actor said to the pair. In an effort to cheer Paul up,

‘And Just Like That’ Recap: Miranda Makes A Confession To Che