We adored her most recent character in 90210, Annie Wilson, who Shenae Grimes-Beech portrayed as a young girl who grew up with a passion for theater. Shenae shares this same passion in her off-set life, but decided to leave acting behind and follow her dream towards fashion and design. In August of 2013, Shenae and husband Josh Beech joined together to create their own brand, Two Halves. Just when you thought they couldn’t get anymore rad… they do. The two lovebirds combined their punk rock style and Bohemian spirit into a brand we can’t wait to see evolve! Stay tuned (spoiler alert)—Shenae isn’t planning to stay out of the TV spotlight just yet!
Cliché: Two Halves is the perfect name for your brand, especially considering how close you and Josh are. You really are two peas in a pod. What made you and Josh transition from lifestyle blog to fashion label?
Shenae Grimes-Beech: I had a fashion blog on my own a few years back, but it wasn’t being run the way I had wanted it to. I shut it down, and planned to re-launch. I was waiting around and my husband encouraged me to do it on my own. He had a web designer who did his band stuff who was great. He designed the site and we got Two Halves up and running. I don’t know exactly how we decided to do it together, but having many mutual passions definitely helped. We get to spend a lot more time together, so we decided to launch Two Halves, the brand! Josh had designed for his streetwear label, Cut and Run, for a few years before we met, and I started designing jewelry for him. A year in, it made sense that we closed the chapter on streetwear and started a chapter that infused both of our design aesthetics.

You went from being in front of the camera in Degrassi and 90210 to working behind the scenes for Two Halves. Tell us a little about the transition.
It was one that I’ve been eager to make for a long time now. It was one of those moments in life where there comes a fork in the middle of the road. I could have continued taking acting jobs, or I could make the decision I did—to pursue my dreams and see how that works out! I’m 25 now, and I was 23 when my job (at 90210) ended. If I give my life away for another 5 years, I’ll be 30, having to start from scratch, so why not? The time is now. Acting isn’t going anywhere; it isn’t going to disappear over time. I could always go back to that. It’s been fun!
What is your schedule like when it comes to working on Two Halves?
Well for us, we’re not seasonal. We’re doing everything on our own. It’s not about a summer, fall, or winter collection just yet, so it changes every day. The priority is outreaching to retail stores. Some days it’s getting pieces and overseeing developing, while others it’s marketing and how to get word out and build our customer base. It’s very hands on—it’s a full time job!
I imagine your partnership with Josh has been a dream come true, but what is the hardest part about working with your husband?
Our dynamic is pretty well down now. At first, it was figuring out who had what strengths and how to best utilize our time. It’s hard because we love doing everything together! We realized it’s more efficient working on different aspects of the company. Josh handles certain parts  that I wouldn’t get close to with a 10-foot pole! Every day, the struggle is figuring out how to do it all by ourselves. We have to decide when it’s appropriate to bring more people into the picture.
Has music influenced Two Halves as a brand?
Yes, very much so! Style icons influence Josh and me along with certain time periods and decades in music history. From Josh’s punk rock influences to my classic rock obsession, music really inspires us! Our pieces are on trend to a certain extent. We strive to create timeless statement pieces that can be worn in a variety of ways. We have a lot of musical influences, mostly musical legends!
Who is your biggest inspiration when it comes to style? We know Steven Tyler, but is anybody else in the running?
He is pretty high up there, not going to lie! Stevie Nicks is awesome. Jim Morrison is a big style icon of mine and Josh, of course! He has this kind of classic, English gangster rock down to a T!
What is your go-to outfit?
Awesome skinny jeans! In the summer, high-waisted shorts and one of my way-too-many band tees or one of our Two Halves t-shirts. Jacket, vests, and blazers are a must. I change my creepers to heels at night and I’m good to go! [laughs] This is pretty much uniform by now!
What’s next for you?
For me, I think my priority is Two Halves the brand right now. It’s seeing it evolve and figuring out what the next step will be. We’re developing denim, which is really exciting! Hopefully we’ll be getting into handbags and some outerwear sooner or later. It’s all very exciting! On a personal front, I’m hoping to pursue fashion hosting. Hopefully people will see me on camera again, soon!
Read more Fashion Interviews on ClicheMag.com
Shenae Grimes-Beech Interview: Photographed by Elias Tahan 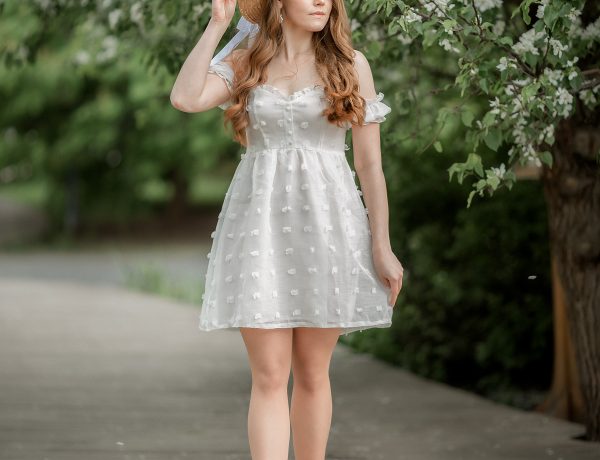 The Perfect Dress for Every Occasion