Mai Pham was born and raised in Alberta, Canada. She began her YouTube channel at 13-years-old, by uploading a video of the contents of her high school volleyball bag. She continued taking her followers through her lifestyle and various beauty transformation, and has grown her channel to over 1.39 million subscribers. Mai is passionate about traveling, going on adventures, and also being an outlet for conversations about real and meaningful issues. Her next big journey is her self-designed fashion brand!

I started YouTube when I was 7, so I don’t really remember life before YouTube. But before it became my full time job, I was in high school. So I was just waking up, going to school, playing sports after school, then working on YouTube. Which was editing videos and filming videos.

I would play volleyball after school, and I would bring my camera around. So a lot of my vides on YouTube revolved around that sport. So, it was never really like YouTube became a full time thing all-at-once. YouTube was all around me, and I would always bring my camera around. So it was always involved in my life somehow. I guess the cycle just repeated until I made it my full time job.

You started youtube at the age of 7, what has it been like growing up on camera? Did you have someone who acted as your inspiration?

I felt really natural growing up on camera just because it was all I had. I wasn’t allowed to hang out with friends much as a kid, so I was just stuck inside with a computer and my camera. My camera was kind of an outlet to talk to people, because I didn’t have people in real life to talk to.

So, I’ve always been really comfortable on camera. I think that my supporters can see that I’m really genuine when I speak about things, which I love. It’s never felt like a pressure to be someone that I’m not online because of that. 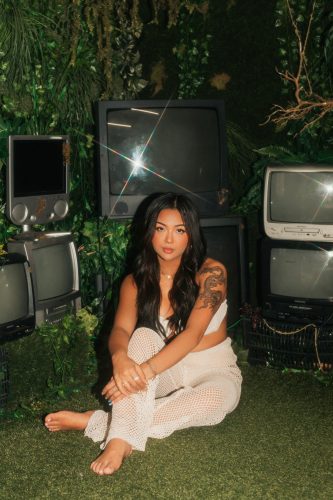 What challenges have come with being an Influencer, and how have you stayed authentic to who you are when in the spotlight?

I would say the challenges with being an “influencer” is that your life is online all the time. Especially with me posting three times a week, and sometimes every single day, it’s kind of hard to filter out what gets put online. Sometimes you post things without even thinking about it, and realizing the consequences it could have. But, I think the way I present myself online is my genuine self. Some of the things I say may not be popular opinions, but people respect that I’m real online. Maybe I don’t have a filter all the time, but it’s being authentic and genuine that I think people really love.

I noticed my supporters like when I’m more vulnerable online, and it’s easier to be vulnerable online than to be a person that you’re not. So, it hasn’t been difficult for me to be authentic online because of that reason. I grew up on camera, so it was never something where I had to force a personality.

You’re known for your transformation or “glow-up” videos. What drew you to begin creating those types of videos?

I think what drew me into creating those types of videos, is that I would see all these celebrities and influencers post selfies and stuff like that, but you never really see the behind-the-scenes of what they do to look that certain way.

Sometimes it can be misleading to young girls, because they see those pictures without seeing everything that they had to pay for and all the procedures that they had to go through. So, I wanted to create a video where people can see all of the money that goes into it and all of the time that goes into the process of looking this certain way. When you look at it online for a split second, you can see girls and be like ‘oh they look so flawless and effortless, I wish I could look like that’. But you have no idea the amount of effort that they put in to look that way. So, I made those videos for young girls to be able to look at them and realize that not everyone looks that way. There’s a lot that goes into it.

I’m only 18, so I am learning new techniques and everything as well. But I’m just referring back to myself when I was younger, I would always use YouTube as a platform to learn new things because I never had a female figure around me to help me. So, I want to be that outlet that young girls can go to because I used to feel the same as them and I know how they feel.

Moving out at the age of 15 is quite an accomplishment, but how different is it to be moving into a house in LA with your best friend at the age of 18?

Even though I lived only 5-hours away from my parents when I moved out, I never relied on them to come help me with things. So, I feel like it’s honestly the same. The only difference is the laws.

Whenever I talk to people that move to a different country though, I notice that one of the biggest struggles is that you can’t just road trip to go see your parents. Especially right now with all the restrictions, you can’t just fly them over and you can’t just take a quick flight to go see them. So, I would say one of the most difficult things is realizing that you are out here alone. And if you needed the support from your family, it’s not as easily accessible. But other than that, I would say it’s pretty easy! 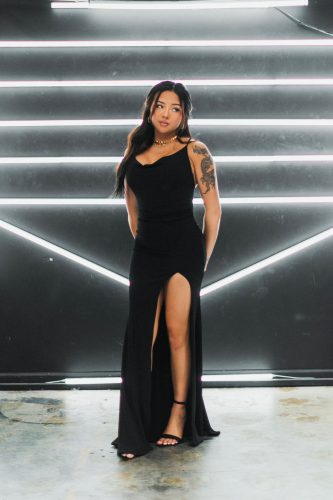 Traveling has always been a part of your life, whether it’s to Bali or LA. You started traveling the world on your own at the age of 16, What do you love about traveling independently?

What I love about traveling independently is that you really learn a lot about yourself and what you like. I don’t think people realize that when you travel alone it’s not as lonely as you think it would be. If anything, you just get to do whatever you like without the pressure of having to please others. I know that sometimes when traveling with friends or family, you want to do things but other people don’t want to or your forced into doing things that you don’t want to do. When you’re traveling along, you’re on your own schedule. You’re really just stuck there with yourself, and you have to learn how to overcome obstacles and problems without the help of others. Yes, it can be challenging and difficult at times, but it just helps you in your everyday life.

I think a lot of people see it as such a huge step of ‘Oh, I could never fly to another country!’ Well, you don’t have to do that huge step first. It all starts with little things, such as going to eat at a restaurant by yourself to realize that not everyone’s looking at you and no one actually cares that much. And you do those little steps to reach your big goal, which may be doing a solo travel trip. I think the most important part is having fun by yourself. If you’re just doing things alone it can get lonely, but if you make it a goal to be comfortable in your own skin it will be really good learning curve.

Where has been your favorite place that you have traveled to?

My favorite place I’ve ever traveled to is I think pretty obvious if you went and took a look at my channel, but it’s Bali. The reason why I loved it so much is because it’s always been my dream place to go to as a kid. After my 16th birthday I finally decided to take a solo trip there. It was my first solo trip to a whole other continent, so it really has a special place in my heart.

The reason why I love it so much is that the people there are so kind, and their culture is so unique compared to every other place that I’ve ever been to. I feel like it really is a spiritual reset. I’m not sure what it is there. Everyone there loves yoga and really believes in energies. I feel like there’s always so much to do. You can wake up, go to a waterfall, hang out there for hours and hours, and there’s endless amounts of things to explore. So, I never feel like I’m bored. I’ve gone back there about 5 times now and I’ve never felt like it’s gotten old for that reason.

You have worked on many collaborations with Bumble, The Picnic Collective, Reebok, Belief, and more but how different is it to be releasing your self-designed clothing brand?

What I love about making my own clothing brand is that I had a lot of input into the sourcing of the clothes. It was really cool to see the process of how everything works. When you’re working with other brands, they handle everything and you’re just promoting the product. But with me creating my own clothing brand, I really got to talk to the people – the warehouses that manufacture the clothes, the designs with the graphic designer – and I really got to create my own product that I’m promoting.

So, there’s a lot of backstory to it. I like how I’m gonna be able to explain the whole process of me creating the product, everything that went into it, and the story behind it.

Who has been your biggest fashion inspiration?

Honestly, I wouldn’t say there’s one particular person that I look up to. Obviously, I’m on social media all the time so I see all these trends coming in and out when it comes to clothing, and I try to be on top of them. Other than that, I would say my core when it comes to my fashion inspiration is street wear. That’ll always be what it is, just because I grew up loving that. By that I mean: sneakers. A lot of my clothes revolve around what shoes I’m gonna wear. It doesn’t even have to be sneakers, it can be heels. I just love shoes, and street wear.

The Latest Jewelry Trends to hop On

5 Things you Didn’t Know About This top Holiday Destination: Croatia