An Interview with Indie Band Did You Die 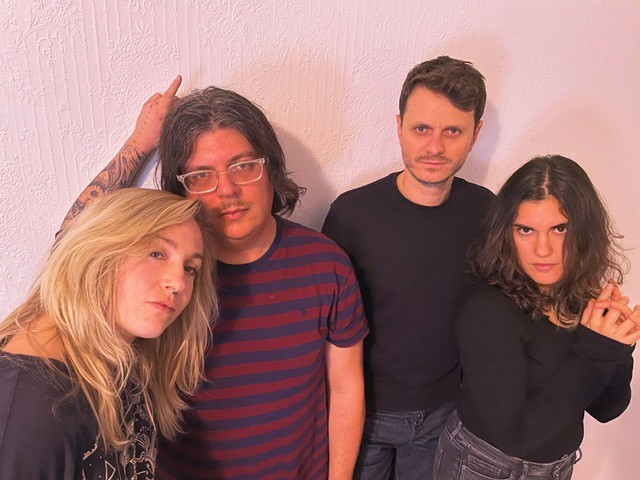 Did You Die is made up of Richie Felix Alexander (vocals and guitar), Madison Penland (synth and vocals), Jula Sky (bass and vocals), and Tom Rapanakis (drumkit). Vancouver, BC indie darlings, Did You Die, dropped their sophomore album, “Thirteen Moons,” on 1/1/22 on Blew//Rose. The entire album was written, recorded, mixed, mastered and produced by the band’s main songwriter, Richie Felix Alexander. He wanted to capture the exact sounds that were looping in his head without having to compromise with any producer or engineer. The sound of the album goes further than previous releases and incorporates 80’s Alternative, new romantic soundtrack vibes, Dream Pop, Shoegaze, and Post-punk with a modern twist. This ultimately created the band’s own unique sound which is as fresh as it is familiar. The drums on the album were performed by the band’s long time drummer, Luke Bodi, who lives in Victoria, BC. During the making of the album, Alexander and Penland fell on hard times in the pandemic, and had to overcome addiction and a brief period of homelessness. Ultimately, the two found their way back to themselves and ended up as roommates after, what they call a “pandemic score,” and were able to rent a beautiful home in Vancouver, BC in January 2021 and finish the album. “Thirteen Moons” is the follow-up to the band’s highly successful “Royal Unicorn” album. “Thirteen Moons” is available now and features the album’s lead off single, “Weightless.” The band’s previous album, “Royal Unicorn” sold many physical LP copies and charted at #1 on college radio in Canada and #57 in the US. The band has played countless festivals including CMWs, Seagaze, SXSW and has shared the stage with the likes of Swervedriver, Nothing, Black Mountain, Trail of Dead, and Yuck, to name a few.

With their single and music video, “Weightless,” out now, we took some time to hear more from Did You Die. Read below to learn more about Did You Die, the story behind their single, and what’s to come.

*Interview questions answered by Richie Felix Alexander, main songwriter and founder of Did You Die.*

Hi Did You Die! Let’s start with how did you guys get the artist name?

I was late meeting a friend one night and she texted me: “Did You Die.” At the time, I was looking for a name for the band. We eventually met up, and over some drinks, we thought the name was super funny, tongue and cheek, so I named it that.

Madison (vocals and synths) is the only true local. She’s from Tsawwassen, just outside Vancouver. Tom (drums) is from the UK, Jula (bass) is from Argentina, and I’m from Toronto. We are based out of Vancouver, BC, Canada.

At what point in your life did you all decide to pursue a career in music? How did you all get started?

The music bug hit us all at a very young age. I started taking piano lessons at the age of 5. The rest of the band got into music around the same time or a little later on in their tween years. Music has always been apart of our lives since we can remember.

Has your guys’ upbringing played a role in shaping who you all are and defining your guys’ sound today? If so, how?

I mean as far as learning about bands from our parents or friends when we were younger, sure. Depending on which one of us you are talking about, what part of the world we grew up in, that would definitely play a big part in us stylistically. What’s really cool is that we naturally all share common musical influences that we’ve had before we became a band. It makes things flow much easier. We all speak the same musical language.

How would you all describe your group’s sound to readers who may not be familiar with you all?

Do you guys have any hobbies outside of music? What do you all do to stay creative?

A lot of our hobbies are inspired by where we live. Because we live in Vancouver, there is the beach, great camping spots, some of us go for hikes, lots of outdoorsy activities end up being your hobbies. This can be distracting at times when it comes to creativity.
That said, creativity can happen at a moment’s notice for me. I might see or experience something out in the wild that makes me feel a certain way. Those feelings from said experience will inspire a song. Something will start looping in my head, usually a melody, and I’ll work on it until it sounds like it does in my head. I can get a high from the final result. Music and song is the way feelings sound to me. The experiences that motivate me to create are so unique to that exact period of time in my life, that I can’t repeat it.

Who are some of your guys’ main musical influences?

I was listening to Sonic Youth’s “Daydream Nation,” My Bloody Valentine’s “Isn’t Anything,” and DIIV’s “Oshin” LPs when the band started. I would say these three records are the original foundation for what we initially were trying to achieve when we started. Eventually, the band took it’s own, unique sound on, which is were we are now. We just sound like ourselves.

Do you guys have a dream collaboration in mind?

What are some of your group’s future music career goals?

We’d like to continue to see the world, meet new people, and see friends through touring. Going to Europe, South America, and Japan are three major milestones that we hope to achieve through promoting our new album.

Now onto your release, “Weightless.” What inspired this song?

“Weightless” is the lead off single from our new album, “Thirteen Moons,” which dropped on New Year’s Day! The song was inspired by seeing the light at the end of a tunnel from a toxic situation through my dreams.

What is “Weightless” about?

The song was inspired by the feeling of escaping a toxic environment by creating some type of hope or solitude in my thoughts, away from the toxicity. Unbeknownst to me, I was going through a difficult time and my subconsciousness really laid it all out for me on paper.

How did the music video for “Weightless” come about? What was your group’s vision for the video?

When we decided to make a music video for “Weightless,” I noticed my friend’s, Becca Buick, Instagram stories. They were really creative and interesting. She has a way to hook you in, even if it’s just for 15 seconds. So after viewing one of her stories, one day, I asked her if she wanted to collaborate on a music video with me. The end result is what we came up with. It’s just Becca expressing herself freely in different scenarios, interpreting how the song made her feel in the moment in a free manner. No one told anyone what to do. All I wanted to do was to capture Becca in the moment. Maybe we had a few conversations on different shooting locations, but that’s about it. To me, the best art is created when everyone is free to simply express themselves and be themselves. That’s what happened here. We’re happy people are connecting with it.

What message do you all hope fans take away from your group’s music and from “Weightless?”

Whatever the song or lyrics mean to them is a personal experience for the listener. We wouldn’t want to interfere with that and give them a particular message to take on. We are just happy to know that it’s being listened to and that it means something to others outside of the band. That’s all we could really ask for.

What’s one of your guys’ proudest moments of your group’s music career so far?

The release of our new album, “Thirteen Moons.” It’ one of those rare times for a band where the current album represents where the band is at musically. It’s an extremely accurate snapshot. The response to the album has thus far surpassed any of our expectations. Thank you all!

What would you all say are the greatest lessons you’ve all learned so far?

To just fearlessly be yourself.

What’s next for Did You Die? Are you guys working on any upcoming projects that we should be on the lookout for?

We just released our new record, “Thirteen Moons,” on New Year’s Day. It’s available on all streaming services. Vinyls are in the works. We are planning on touring in support of the album when the world opens up a bit more. We also have two additional albums in the bag that we are currently working on while we wait for live shows to come back.

Where can we follow you guys on social media?

http://sng.to/didyoudie – this will link you to all of our socials and sites that stream our music.

Before we let you all go, let’s ask you guys something random. What is your guys’ favorite food?

I live with Madison and she does see a lot of pizza happening at certain times of the year! Pho is my fave though.
Madison: “Pizza for Richie! I love cheeseburgers the most.”
Tom:”Favourite food is probably octopus with a bit of vinegar – in Greece.”
Jula: “Schnitzel is my fave food!”

Thank you all for the great interview! Wish you guys continued success!

Soundtracks of the Summer

The History of Luxury and its Role in Innovation

Ben Affleck Insists He Has No Regrets Making ‘Gigli’ With Jennifer Lopez: It Was A ‘Gift’ To Watch It Bomb