Like many actors over the past year, Alondra Delgado found her career momentarily suspended by COVID-19. After many months, her perseverance paid off and she was cast as newcomer Vanessa Montes on the hit teen football drama, All American. While Alondra didn’t know much about football at the start, already being an avid fan of the show certainly helped!  If her secret past with Asher is any indication, Vanessa is definitely shaking things up on season 3, currently airing on Mondays at 8pm on The CW.

Cliché: You’re an actress, writer, and producer. Has wearing so many hats enhanced your understanding of the industry at large?

Definitely! An actor, writer, and producer have many different responsibilities and each of them are essential. There is a unique feeling when writing something that truly means something to you and then watching it being brought to life. It is amazing to see how people create their own take on your words, and this creates more depth and meaning to the stories. Being a producer for the first time made me admire a lot more everything that happens behind the camera. The whole process of putting a film together, the before and after takes so much time and it’s what really permits the film to be accessible to the world. Being an actor brings everything to life and it is what makes the public connect with the film and have meaning. Having the opportunity to do all three has helped me learn a lot and appreciate the art of filmmaking a lot more.

How has the pandemic impacted your acting career?

COVID-19 has changed everything and definitely the filmmaking industry. When it all started a year ago, I was not able to film or book anything for eight months. During the whole first quarantine I only sent two self-tape auditions and continued my training by taking online Zoom acting classes. It was hard. You feel so much time is passing by and your dreams are farther and farther away. Once productions started back up, I started to audition via self-tapes a bit more often and that’s when I landed my All American recurring role back in October. 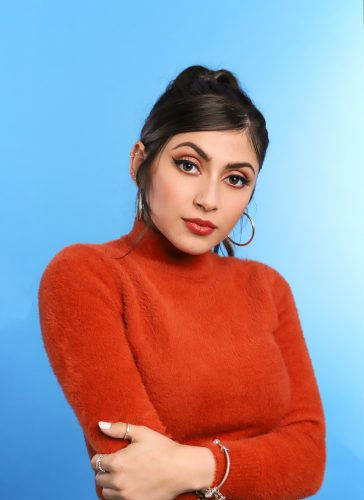 Tell us about your latest role, Vanessa Montes, on All American.

Vanessa Montes is my second recurring role. I was very excited to get cast for this, given the fact that All American is one of my favorite shows and I’ve been watching it since season 1. When I got cast I couldn’t believe it, and still to this day I am overly excited every time I get to be on set. It has been a great experience, everyone in the cast and crew is amazing and have made me feel welcome.

How much did you know about football prior to being cast?

If I am being honest, the only football I knew was thanks to the show. When I started watching All American a couple of years ago I started to learn a couple of things, and when I booked the show I was like “okay, maybe I should ask my friends to explain the rules to me.” I know the basics now and definitely admire the sport because it looks tough for sure!

What can we expect from Vanessa in season three?

Vanessa will bring a new energy to the squad. She has some secrets that might create a bit of drama. She wants to enjoy high school and make friends, but we’ll see how that goes being the new kid and the new head coach’s daughter. It’s a lot of pressure for sure.

Vanessa is very confident. Would you describe yourself as a confident person?

Vanessa indeed is a very confident young girl who carries herself well and knows what she wants. I do identify with her right now. It has been something that I’ve worked on but I describe myself as a confident person. I believe in my talent and know that if I work hard enough I can achieve the goals I have set for me. But it is definitely something I still work on every day and grow and learn.

She also has a history with one of her classmates. Without giving too much away, tell us more!

It is definitely a very interesting situation that I know will have everyone at the edge of their seats with intrigue. I can’t spoil any details, but I can say that Vanessa knows Asher from before.

What do you hope 2021 has in store for you, both professionally and personally?

Personally, I hope everything that is going around in the world gets better and people stay safe and this nightmare goes away. I am grateful for the blessings 2020 did give me and I hope these new opportunities open more doors for me. I want to land my first series regular role soon and another lead role in a feature film. Fingers crossed for 2021!

Hunter Clowdus is An “All American” Guy

If one word could describe Hunter Clowdus as a person, it would probably be “grounded.” The actor and Chattanooga native knows not to take any opportunity in Hollywood for granted. This humble outlook stands in stark contrast to his fictional counterpart. Hunter portrays JJ on the high school football drama “All American.” Season 2 has JJ riding high on Beverly High’s recent state championship victory. Still, Hunter sees JJ as a boy trying to find his way in life like any other high school kid. You can catch season 2 of “All American“ on the CW on Monday, October 7th at 8 PM.

Cliché: You grew up as a small-town country boy! What inspired the big move to Hollywood?
Hunter Clowdus: The impossibility of it I’d say was what intrigued me the most. I think anything is possible if you’re willing to work hard for it. I searched my heart for what I felt called to do and Hollywood is what I found! Creating, inspiring others and storytelling are all in my DNA. I just took that leap of faith and haven’t really looked back since.

What was your first big break?
That’s a tough one as for me it’s been a steady grind, moving methodically as opposed to an ‘overnight success’ story. I have to give this one to my managers though.  Since I linked with them, moves have been made. Like true Hollywood story moves. Business moves. I just couldn’t be more grateful for them and the impact they’ve had not only in my career but my life. As far as a specific project, I still feel I’m fighting for it. To be totally honest, regardless of the heights my career reaches, I’ll always work from that place of “I’m still fighting for it.”

Talk about your show, “All American” and your character, JJ.
Ahh honestly it’s SO much more than just a show or character for me. It’s a beautiful story that I’m happy and humbled to be a part of. There are so many levels to it as a whole which is why I believe it resonates with so many. It’s about love, struggle, heartbreak, overcoming, discovering, believing, achieving! It’s universal and it speaks to so many issues that we all face every day. My character at first glance is the comedic relief to what otherwise could be considered a darker drama. But in reality I believe JJ is truly just as lost as he is found. Just as is everyone in high school. Dare I say just as everyone is in life. I mean we’re all just continuing to find our way right? I think he’s comfortable in his role as the party guy and absolutely loves that attention. He’s going to go out of his way to make sure his friends and family have a smile on their face which in turn puts one on his. But ultimately he is human and although he’s about the most positive guy you’ll ever meet, he knows all this one day will come to an end. The popularity, the girls, everything that runs his world, but right now he’s just living in the moment.

JJ is very passionate about football, and you yourself played several sports growing up.  How do you think that sense of camaraderie and loyalty to his “football family” shapes who he is as a person and as a player?
He is the epitome of a team player! When he steps between those lines he’s going to give it his all. I think he takes a lot of pride in that and also in setting an example to the other players of what the intensity level needs to be at. It’s actually really great with the cast and other football players out there because we all have a very similar camaraderie. When we get to set on football days, we all dap each other up and joke around, warm up, and have fun! As special as those times are for JJ, I think they may even be more special to me.

What is JJ up to in season 2?
It’s hard for him to get through a sentence without reminding the world that he and the Beverly Eagles are STATE CHAMPS! JJ is absolutely riding high and oozing confidence at every turn. Feeling bulletproof and continuously pushing the limits following the ’rules are meant to be broken’ mantra. You can’t help but smile wondering what this guy is going to get into next.

Without giving away any spoilers, what do you hope JJ will learn or accomplish this season?
Ultimately I hope he finds a solid solution for achieving this high that he chases. It can be a really scary, lonely, and dangerous place for high school superstars who exit that world and no longer have that affirmation or drug-like feeling to carry them. I don’t think that happens now, I think that’s down the road, but still an arc perhaps that leads to the face to face with reality would be a truthful one to show. I think this season however should continue with JJ being JJ. A kid who knows no consequences for his actions.

Who is your favorite character on the show other than JJ and why?
Great question!! Knowing everyone personally makes it that much harder as I’m such a fan of everyone’s work but also everyone’s heart as cheesy as that sounds. It truly is a family on set. That said, I’d say a character who I think I’d have a blast playing, lots of great depth, and a really cool arc would be Jordan Baker. Especially this season.

You volunteer with several student organizations. What does being able to get back to the community mean to you?
In one word, EVERYTHING! I mean that. I’ve always wanted to use any platform I was ever privileged enough to get to help and inspire others. I think life is such a gift and although difficult at times I believe with the right guidance and support that you can almost will your way to success. Dreams are to be lived. Happiness is to be had. I’ve kinda coined this phrase, ‘Perception is reality,’ so I feel if I can ever enlighten someone or help them see things in a different way then sometimes that makes all the difference. It’s all possible. You just have to believe.