After the success of their recent sophomore LP release, Honestly Glad It Happened, Blue Light Bandits are bringing the album to life with their latest music video for “After Rain.” The video captures a quintessential night at the band house over the past year and a half during the recording process for the album, featuring band members Dan DeCristofaro, Ethan Bates, Simon Adamsson and Jay Faires meeting up for a basement jam session. Filled with friends, laughter and warmth, the “After Rain” music video showcases the heartfelt dedication that defines the Blue Light Bandits music approach.

This song is simply a love song to music. I’ve always felt like I’ve had an intimate relationship with music as a songwriter. You put in time and love and it comes right back. It’s one of our older songs – I wrote the original idea during my senior year of college in 2012. I created an instrumental loop of the chorus and stored it in my old boss loop pedal. A couple years later we were going through some gear and I played the loop out loud to the guys and they were like “what was that?!”… It inspired me to go home and finish writing this song. — Dan, Blue Light Bandits

“After Rain” is the fifth track from Honestly Glad It Happened, an album that showcases Blue Light Bandits’ eclectic infusion of genres and styles. The project —  released last month — introduces the next evolution of their songs, sound and direction.

The Blue Light Bandits are an award winning, 4-piece independent groove rock band from Worcester, MA. The BLB sound is inspired by a soulful mix of jazz, neo-soul, pop, and funk music. Since the release of their B.L.B Demo in 2014 and the self titled debut LP in 2017, they have amassed over 2.8 million streams on Spotify. Live BLB shows have become a staple of the Boston, Worcester and New England music scenes with residencies at Lucky’s Lounge in Boston and Michael’s Cigar Bar in Worcester as well as frequent appearances at the best breweries, wineries, and festivals in the region.

Dan DeCristofaro (keys and vocals) and Ethan Bates (bass and vocals) are the founding members, singers, and songwriters behind BLB. Dan is a soulful writer, producer, and arranger who has also begun releasing singles as a solo artist with “Give Me Your Love” in May of 2020 and “Unbreakable” in November 2019. Ethan is also an accomplished cellist and performs and writes solo compositions as “Ethan Bates Orchestra” where he builds live loops and layers organically for each performance. The current iteration of the BLB lineup features veteran touring and session drummer, Simon Adamsson, and multi-faceted guitarist, Jay Faires, who also rounds out the signature 3-part BLB harmonies.

Watch the official music video for “After Rain” on the band’s official YouTube channel here. Experience the sophomore album – Honestly Glad It Happened – on all music streaming platforms today.

July 9th, 2021 – Buzzing Boston rapper, spoken word poet Oompa has returned with her new single and video “GO” featuring Dan DeCristofaro. Produced by Dephrase, “GO ” was written with carefree Summer vibes in mind, or as Oompa affectionately explains “real Gemini season energy”. It’s the perfect soundtrack to those fun-filled, warm Summer days and euphoric new love feels. With an undeniable reference to Chaka Khan and the classic, West Coast G-funk sound, “GO ” is an upbeat, bop with a “catch you on the first listen” hook: “We go, and go, and go” .

Sharing the sentiment behind the track, Oompa says “This is the love where you slap red tinted glasses on, and all red flags look like surrender. We know it will end in flames, or with us having to return to the reality of our lives and our city-girl hustle, but for now, we go. We get lost and hope reality doesn’t find us”

In the accompanying visual, we find Oompa and a romantic interest, played by friend and frequent collaborator, Therlande Louissant aka Tloui channeling a Queen and Slim-style love story, cruising in their retro Ford Mustang without a care in the world. Inspired by the cinematic feel of the cult-classic film Drive, the visual features stunning shots of an endless highway interspersed with mood-setting closeups of the exuberant duo. “GO” collaborator Dan DeCristofaro makes an amusing cameo as the getaway driver as the couple roll up at an undisclosed location, ready for the next step on their insouciant adventure. The official “GO” video forms part of 10 highly thematic accompanying visuals that will be released in the lead up to Oompa’s upcoming EP, Unbothered.

With a cadence and energy akin to the legendary Missy Elliott and the poetic finesse of Noname, Oompa arrived on the scene in 2016 with a sound and message that instantly demanded attention. In addition to being praised by NPR, Huffington Post, Boston Globe, and NBC, Oompa has shared stages with the likes of DVSN, Charli XCX, 24KGoldn, Tinashe, UMI, and Rico Nasty. Stay tuned for more from Oompa as she gears up to release more new music over the Summer. 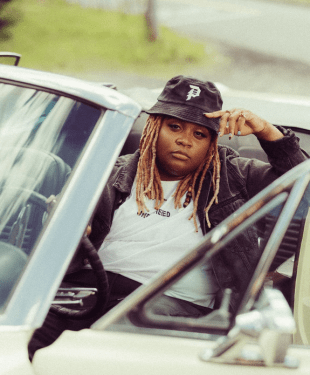 OOMPA is a nationally-acclaimed, Boston-born, poet, rapper, and educator, who is forever representing the queer, black, orphaned, hood kids n’ them. She was named one of NPR’s 2020 Slingshot Artists to Watch and her engaging, interactive performing style won her the Boston Music Award for Live Act of the Year in 2019, following her 2018 Unsigned Artist of the Year victory among an unprecedented 12 total nominations. In a 2019 feature, WBUR’s the Artery describes the lyric-focused rapper as having a “natural tenderness with language” and calls her verses “funny…incisive and memorable.” Oompa showed this poetic prowess as the winner of the 2017 Women of the World Poetry Slam and a finalist in the 2016 National Poetry Slam. With the release of her newest album, Cleo, Oompa has sold out the Sinclair and a number of other Boston venues.

In November 2020, Oompa dropped her most recent single entitled “Closer” along with a striking visual component. The song showcases a new sonic direction for her music and the lyrics convey a refusal to falter or be reactionary in the face of multiple global crises; the pandemic and an intense awakening about what it means to be Black in the world. This song isn’t a promise to be a cure to the world’s ills, but something that aims to counter the effects of the poison. Her next project, “Unbothered” is set to release in Fall 2021.