Actress Sydney Mikayla found her breakout role playing the titular Olympian in The Gabby Douglas Story. She recently joined the cast of General Hospital as Trina Robinson, a straight-laced teen whose relationship with her father could be described as complicated at best. Sydney is confident that she can handle anything the acting world throws at her…just don’t ask her to be your apocalypse survival buddy! Follow Sydney on Instagram and Twitter.

Cliché: Do you remember when you got the acting bug?
Sydney Mikayla: I really felt like I caught the acting bug when I did The Gabby Douglas Story in 2014. Even though I had been acting since I was five, when I did this movie, I just felt everything click! Getting to train and meet Gabby herself, working with Regina King, and meeting friends who I would watch grow into major superstars (like Riele Downs) really made me want to continue working within the industry. I knew the memories from the experiences I had in Canada would last me a lifetime and I could not wait to continue having those new and fun experiences in the future.

If you had to pick one moment that you would describe as the highlight of your acting career so far, what would it be and why?
One of the highlights I think would be playing Ashlyn on the set of Fuller House. Live studio audiences are almost extinct in the world of comedy, so being able to do a show with a live studio audience, hearing the cheers and warmth of laughter from real human beings just felt so inviting. This was an experience I was really grateful to have before COVID-19 took over.

You had the opportunity to train under actress Wendy Raquel Robinson. What would you say is the most valuable piece of advice she gave you?
Just one? Wow, that would be entirely too hard to choose. She taught me so much, from how important it is to be timely to each and every job opportunity to dressing like your character in rehearsals and even auditions. I think the most important quality she taught each and every one of her students was how to be professional. She shared that life on set is not always easy, and sometimes requires more patience than you may think. But because of the discipline she provided, her students have gone on to Broadway, to write and produce their own shows, and create their own fashion brands featured in New York Fashion Week. I just hope to continue the legacy.

You’re on General Hospital! How does it feel to be involved with such an iconic show?
It feels absolutely incredible to be a part of the GH family. General Hospital has so much amazing history and it’s so interesting when the writers decide to bring back previous characters on the show. Working here definitely keeps me on my toes and I just love how the fans are so invested in the show.

Tell us about your character, Trina Robinson.
Trina is an 18-year-old straight-A student, with a passion for track and a love for art. She is a great friend, a reliable daughter, and a trusted intern. In Port Charles, Trina finds friendship, an art mentor and her then dead and now alive father. Whether Trina’s being kidnapped or simply going to a school dance with her friends, her determination to find the truth always makes her such a fun and feisty character to play. 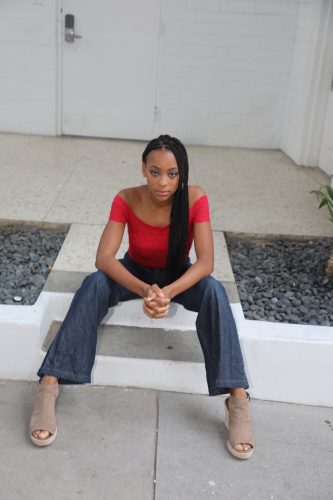 Are you excited about where Trina’s arc is headed?
Absolutely! I really can’t wait to see if Trina will ever forgive her father, and how that will all play out. I know that she has always looked up to her father, and so she feels deeply betrayed and hurt by him. Hopefully Trina will forgive him soon so we can see more of the father daughter bonding time that the audience loves.

How does it feel to be able to work with Maura West?
Incredible! She recently told me to check out The Wilds, a new TV show on Amazon, and watch and learn from the actors on screen. It’s just another example of how Maura always shares her wonderful expertise and inspires me to become a better actor. Her professionalism and beauty makes her truly wonderful to work with and watch on screen.

You also star as Wolf in Kipo and the Age of Wonderbeasts, which is about a post-apocalyptic adventure. What’s your post-apocalyptic survival strategy? Who and what would you bring with you?
This may be a bit morbid, but I think I would just die. Think about it, constantly getting chased everyday by talking animals? I wouldn’t be able to survive like Wolf did. I think I would just try to get some extra food, and if I happen to get eaten, so be it. It seems like too much work to try to outrun everything in order to stay alive. The stress would probably kill you anyway.

What kinds of roles would you want to tackle over the next few years?
Recently, I worked with the director of Disney Channel’s Sky High. He said that one day there might be a sequel to that movie, so I would be super pumped if I could play a leading role in that movie. Besides that, I would love to be in an August Wilson movie adaptation of his work. I just started getting into his plays, and I would love to be in one of those films and work with Viola Davis. I would also love to be on Broadway someday.

General Hospital, Kipo and the Age of Wonderbeasts

It really is amazing how far we have come as a society when it comes to media representation of the LGBT community. While gay and lesbian characters have long been represented on television and film, the shift to include transgender characters has only recently occurred. Up until the early 2010s, there were virtually no trans characters on our television screens or on the big screen. Nowadays, it has become the norm for shows and films to represent the community in some way, casting a necessary spotlight on their struggles and triumphs. Their inclusion has allowed trans folks to realize that they are not alone, and do not have to feel ashamed to be who they are. For some, just seeing a trans character depicted on screen has literally saved their lives. Here is a list of the top 5 transgender characters that have made a positive impact on our society.

The character of Oncologist, Dr. Terry Randolph may not be known by many outside of the daytime soap opera community, but that does not lessen the positive impact she has made. Portrayed by trans actress Cassandra James, she is the first transgender character on ABC’s General Hospital. She was first introduced to viewers of the show on June 29, 2018, as the childhood friend of longtime fan fave, Elizabeth Webber (played by Rebecca Herbst). Elizabeth was initially shocked to see that the boy she knew as a child (as well as her first kiss) is now a beautiful woman – the woman she was meant to be all along – and embraced Terry with open arms almost instantly. Speaking on her thoughts of playing Terry, James posted to Instagram: “Terry, like many trans people, struggled to find love and acceptance from her family. Transition is rarely arbitrary. Personally speaking, it took me several long years of self-discovery and soul-searching before I decided to transition. I’m thankful to be telling Terry’s story and grateful to everyone at #GH who were committed to have a trans woman portray Terry.”

Shameless is the longest-running scripted series in Showtime’s history, and in its 7th season, the show introduced fans to Trevor. Portrayed by trans actor and activist Elliot Fletcher, Trevor would become a love interest for Ian Gallagher (played by Cameron Monaghan), an openly gay man and one of the show’s original characters. As a social worker at the local LGBT center, Trevor was fundamental in educating Ian, and simultaneously, viewers of the show, about the trans community. He was the first trans character on the show that was prominently featured and his inclusion opened eyes and expanded many minds as it pertained to the trans community and their place in our society.

Netflix’s Orange is the New Black has been credited by many for being the first show to prominently feature a trans character, played by a trans actress, since the show’s inception. Portrayed by the amazing Laverne Cox, Sophia Burset was initially incarcerated for credit card fraud, which she used to finance her gender confirmation surgery. This is a notable struggle that many trans individuals face. Her relationships with fellow inmates and her family were often depicted as complicated due to her being a transgender woman. Despite all of this, at her core, Sophia is a genuinely good person, as long as you don’t get on her bad side. Sophia’s impact on the show, and with fans, as well as Laverne’s critically acclaimed portrayal of the character, garnered the actress a Primetime Emmy Nomination. She also landed the cover of Time Magazine in June 2014, making her the first trans actress to accomplish both.

Created by Ryan Murphy, FX’s Pose has the distinction of having the largest cast of transgender actors ever for a scripted television series. One of the show’s characters that is truly making an impact is Blanca Rodriguez-Evangelista, portrayed by trans actress and singer MJ Rodriguez. Living in New York City during the AIDS crisis of the 1980s, Blanca is the epitome of never giving up in the face of adversity. After being diagnosed with HIV, she takes matters, as well as her fate, into her own hands by forming House Evangelista, a self-selected family that prides itself on providing safety, love, and support to those that have been abandoned by their birth family for being themselves. MJ’s portrayal of Blanca has garnered overwhelming praise from critics and has been called the “breakout star” of the series.

Sense8 may have ended way too soon, but the popular Netflix series will live on in our hearts as one of the most groundbreaking shows ever produced. Created by sisters and trans women, Lana and Lilly Wachowski, along with J. Michael Straczynski, Sense8 featured a racially diverse cast, in addition to the fact that it tackled subjects that are not normally depicted in many science fiction shows and films, such as sexuality and gender identity. One of the show’s breakout characters was Nomi Marks, portrayed by trans actress Jamie Clayton. Try and wrap your head around this one: Nomi Marks is a caucasian trans woman in a same-sex interracial relationship – and ultimately, marriage –  with an African American woman. How’s that for inclusivity?