In 2001, Apple released the first iPod, a brick-shaped mp3 player whose later incarnations would go on to become one of the most influential devices of the 21st century. At the same time, Justin Timberlake and Britney Spears, two young celebrities whose fame was beginning to skyrocket, were sporting all-denim ensembles at the 28th Annual American Music Awards. While both Apple’s iPod and early-2000’s celebrity fashion were both hot topics, they had yet to become intertwined. Cut to today, where fans of Timberlake and Spears scroll through photographs of the stars on red carpets in sleek suits and tailored dresses, scroll through websites and apps searching for similar fashions—all while listening to the newest albums on the same electronic device. Today, fashion and technology are nearly one, forever influencing one another, forever on a path toward merging completely.

SLEEK AND SMART
With all the fashion forward apps out there—and all the online shopping to do—you’re going to need a chic way to access all of that coveted online content. The Lenovo YOGA Tablet 2 Pro is sleek and stylish. Carry it with you to class, work, hangouts, or family get-togethers and be ready for whatever the day brings. This tablet, developed with Ashton Kutcher, features a 13.3” screen, an 8-watt sound system with a subwoofer, and a built-in Pico projector. The YOGA Tablet 2 Pro even allows users to choose from four different interaction modes—Hang, Hold, Tilt, and Stand—for a more enjoyable experience. lenovo.com

AN APP FOR THAT
Mobile apps are one means of integrating both fashion and technology. On the fashion app, LOU, users can view what big-time designers, bloggers, and models are posting to their various social networking feeds, including Instagram, Twitter, and blogs, all on the same screen. Users can “favorite” photos and luxury products they love and even purchase products they absolutely must have—all on the same app. LOU will even alert you when your favorite products go on sale! loulookbook.com

WATCH OUT
Running back and forth from deal to deal will burn a lot of energy. With the new Apple Watch due for release early 2015, shoppers will be able to track their physical exertion with fitness apps. The watch will even make exercise suggestions based on wearers’ daily movement. But Apple Watch is about more than fitness; it’s also about style and personal customization. The high-tech watch is available in three different collections: Apple Watch, Apple Watch Sport, and Apple Watch Edition. Consumers will be able to choose different faces, bands, and even sizes—38mm or 42mm—to make the watch fit their personality and lifestyle. apple.com

BAG LADY
Another wearable piece of technology is the Everpurse. The Everpurse, which comes in a variety of designs, is essentially a stylish mobile phone charger. Inside the purse, there is a special charging pocket, which, when you drop in your cell phone, instantly charges your device. The Everpurse can even charge an iPhone 5 up to three times over, making it the perfect accessory for travel. And when users return to their homes at night, all they have to do is place the Everpurse on top of the Everpurse mat to recharge the bag overnight. Easy, efficient, and stylish! everpurse.com
Read more Tech articles on ClicheMag.com
“Fashion Meets Technology” originally appeared as “Stylish Tech” in Cliché Magazine’s Dec/Jan 2015 issue.
Photograph courtesy of Everpurse

Find Your Cuddle Buddy with the Cuddlr App 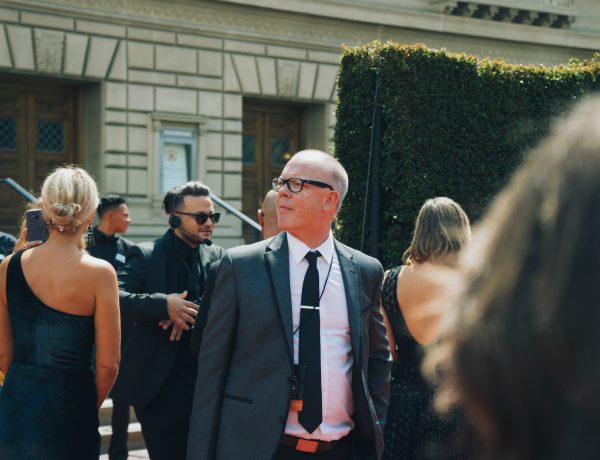 Everything Seems to be Moving Online These Days; Some Celebrities Resist